After a pause of more than three months since Melbourne, the 2020 F1 season finally gets underway with the tyre choice that was always planned for Austria: C2 as the P Zero White hard, C3 as the P Zero Yellow medium, and C4 as the P Zero Red soft.

This same tyre choice will apply for both races in Austria, which will be run on consecutive weekends for the first time, as part of the revised F1 2020 calendar.

The drivers already have experience of this nomination in Austria, because the same compounds were selected for the Red Bull Ring last year. As a reminder, the technical specification of the entire 2020 Pirelli Formula 1 tyre range is also identical to the 2019 specification. 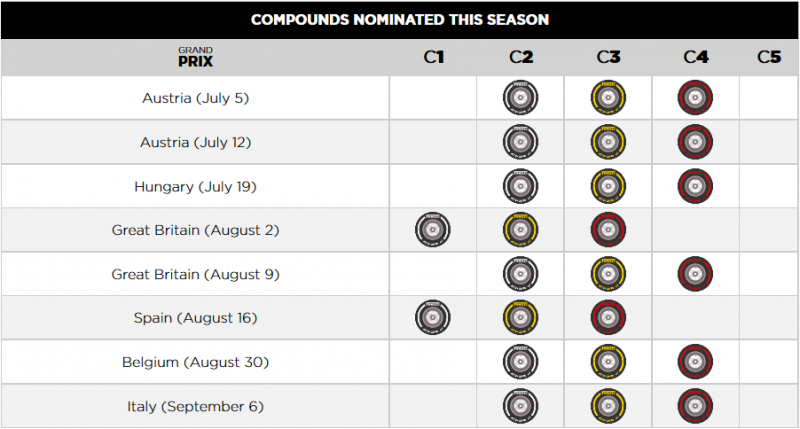 The Red Bull Ring – the ancestor of the famous Österreichring – consists of a short but action-packed lap, with up and down smooth asphalt. It’s all about traction and braking: as well as avoiding the traffic in qualifying. The short lap also means that the performance gap between the compounds is set to be very small.

With both races being held in early July, ambient temperatures were expected to be high but now it seems that we can expect relatively low temperatures in 15-20 deegrees range. However, the track’s location in the Northern Styrian Alps means that variable weather can be also become a possibility.

In the past, this has traditionally been a one-stop race. The majority of corners are right-handers, but the two most demanding corners are actually left-handers: which means that the unloaded tyres go into them relatively cold each time.

In the past, the Spielberg circuit has generated blistering, especially in hot weather. Last year, with the introduction of the 2019 tyre specification, this phenomenon as greatly reduced, particularly at the rear (even though temperatures were considerably warmer than in 2018).

“After a long enforced break, we’re excited to finally get back to competition! This year’s Austrian Grand Prix will have a slightly different look to it, with no spectators and special measures against Covid-19, but we were actually already implementing some of these procedures at the Australian Grand Prix, so operationally we have some previous experience of these unusual circumstances,” said Mario Isola from Pirelli.

“The tyres are exactly the same as last year, so probably the biggest variable element will be the ‘rust’ that teams and drivers might have accumulated after such a long time away from a race weekend.”

“To get back up to speed, some teams have recently run two-year-old cars in private testing or had filming days with the current cars. In both cases, these run on special tyres that are a long way from race specification, so everyone starts again this weekend on an absolutely level playing field.”