Italian tyre manufacturer and official F1 supplier Pirelli has announced which compounds they decided to bring to the next four races to be held in Imola, Miami, Barcelona and Monaco.

Formula 1 switched to 18-inch tyres this year, and after three races in Bahrain, Saudi Arabia and Australia, drivers had all five compounds of dry weather tyres at their disposal.

For the next race in Imola Pirelli will bring the middle nomination (C2, C3, C4) which they also chose for Saudi Arabia, and this combination will be the most common choice during the season due to its wide application in different conditions.

For the new fast street track in Miami, Pirelli will also bring C2, C3 and C4 tyres and for Barcelona they will bring three of the hardest tyre compounds due to a very demanding configuration with lots of long and fast turns.

Monaco is traditionally a track with a very smooth surface and a configuration that does not put tyres under heavy loads, so Pirelli prepared the three softest compounds.

Monaco is usually the first track to which Pirelli brings the softest tyres, but this year they tried it out a little earlier, last weekend in Australia. 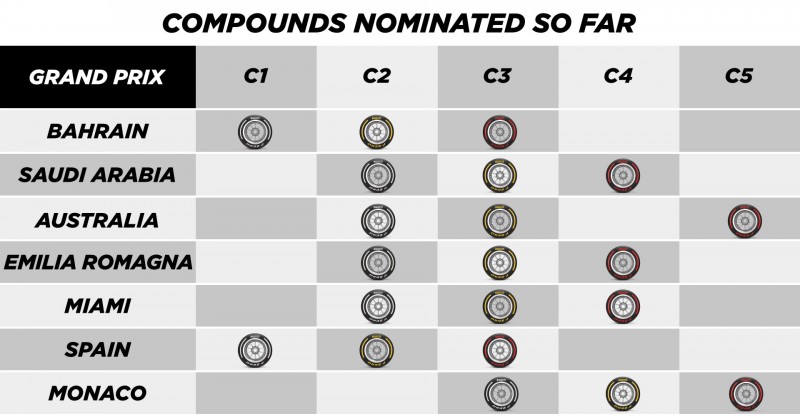