Ferrari first unveiled its new SF1000 at an event at the Italian Romolo Valli Municipal Theater and announced the fight for the title of the F1 2020 season – can Ferrari finally be the winner they have been waiting and dethrone the mighty Mercedes?

The new SF1000 is a detailed evolution of its predecessor, the SF90, which lacked downforce on most tracks compared to Mercedes and Red Bull, and drivers struggled to get the most out of Pirelli’s tyres, especially in the first part of the season.

That’s why the new SF1000 was designed to remedy these weaknesses, with conscious sacrifice of straightline speed that was the strongest characteristic of the SF90, but the new car should be more competitive on a wider range of tracks and track conditions. 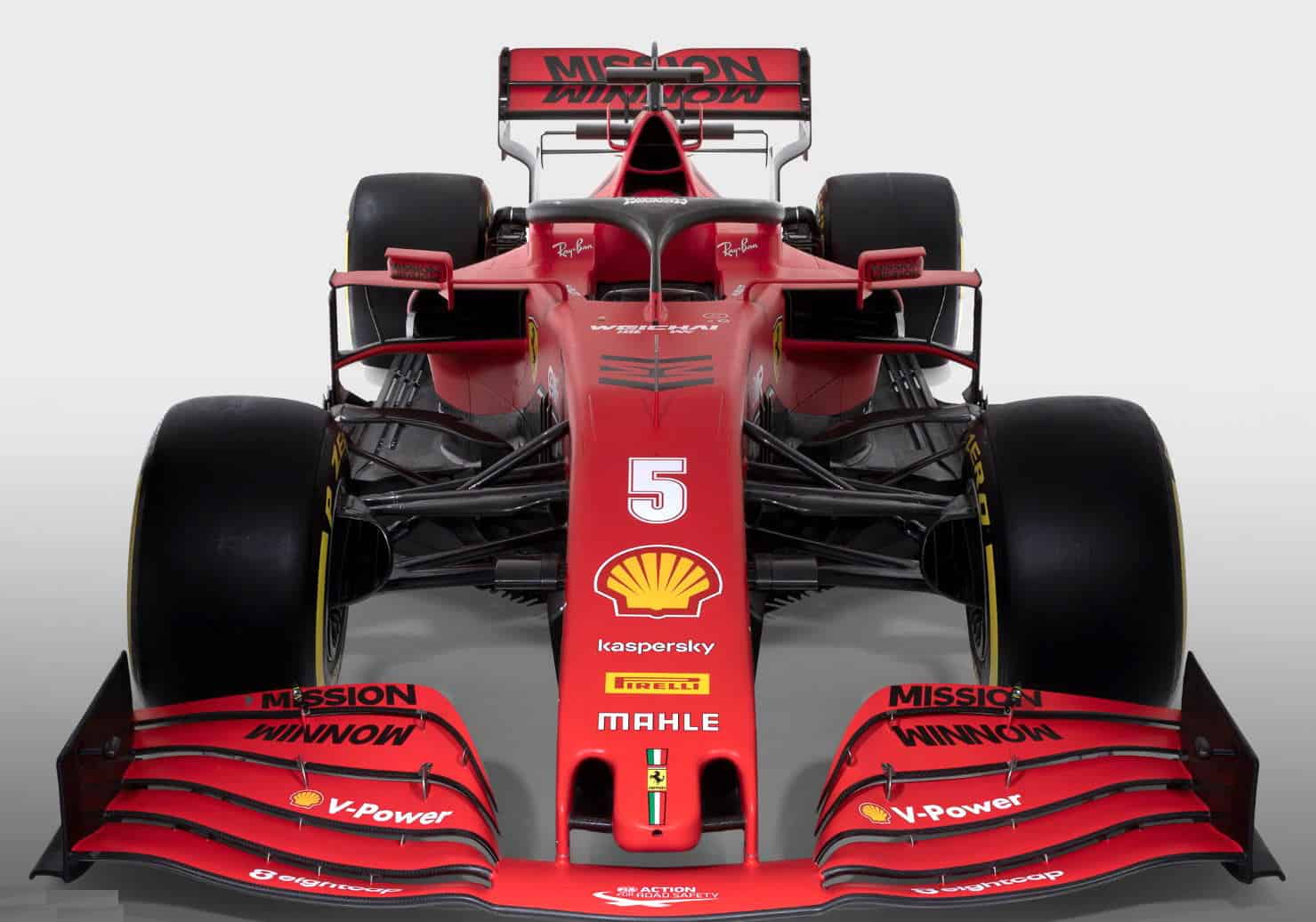 The nose has not changed significantly on the Ferrari since 2016, and the nose on the newly introduced SF1000 is a continuation of last year’s Ferrari trend introduced at the Singapore GP when the nose was given a cap (highlighted in yellow) extending on either side of the center fingertip extension.

It was this aerodynamic package that transformed the behavior of the SF90 in corners, especially the front end which lacked grip at the corner entry, so it is not surprising that the new SF1000, at least for the time being, has retained that development concept.

Like last year, the maximum number of front wing elements is five, and the Ferrari’s front wing reaches a maximum height of about halfway between its edge and nose, compensating for the lack of downforce at the wing edges.

The front wing endplates are also from the second part of 2019 and have two smaller vanes (white) to better direct the air around the rotating front wheels. 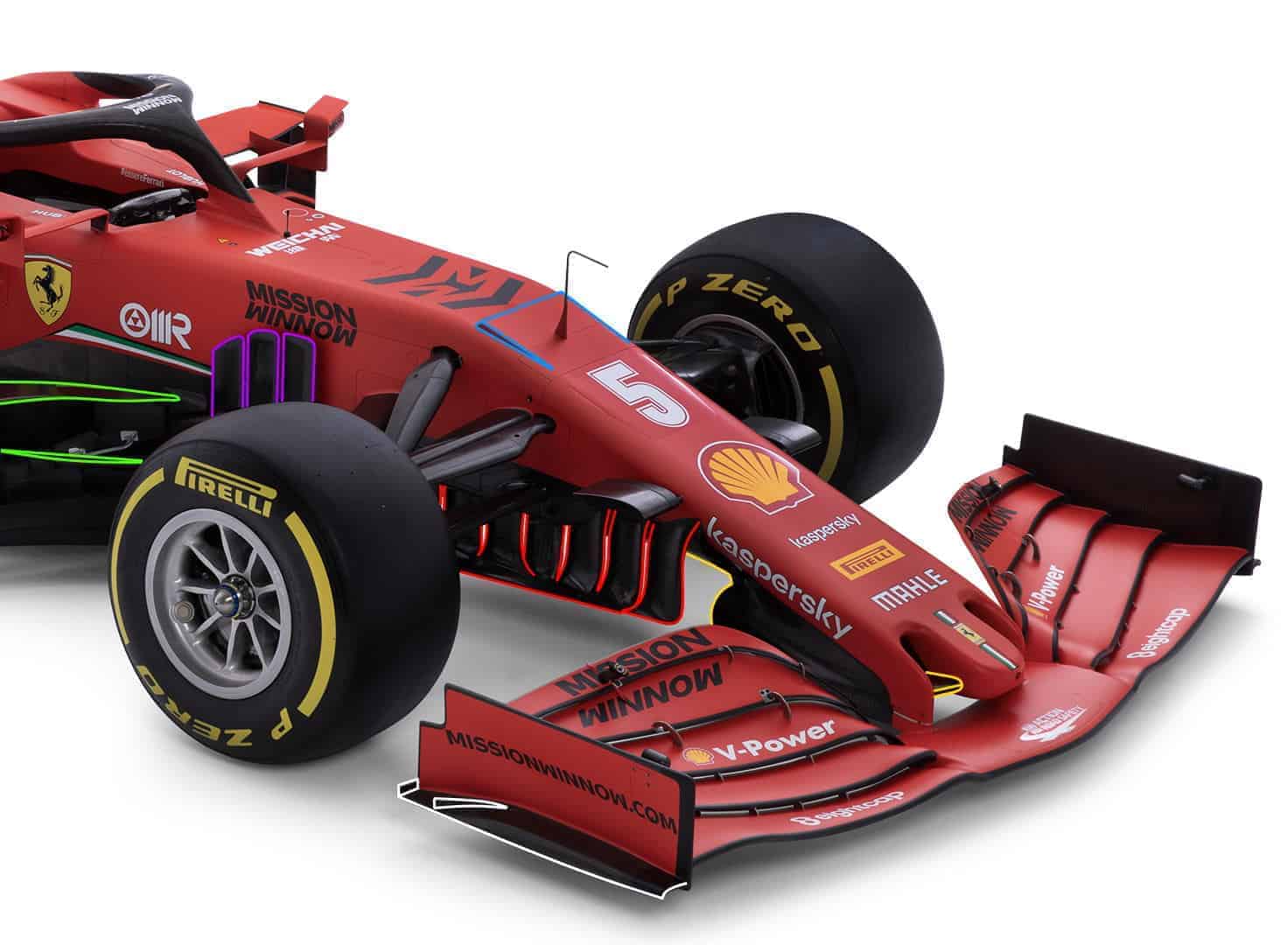 Front suspension and area behind the front wheels

The new SF1000 retains the usual push rod front suspension which Ferrari re-introduced in 2016 with double wishbone setup and in front of the front suspension and under the chassis are seven curved vertical elements (red) that we saw in various forms last season.

Their purpose is to take the air coming from under the nose and from the central, 500 mm wide neutral section of the front wing, shape it and send it towards the bottom of the sidepods, where it will be further directed by the complex aerodynamic structures in that area.

Behind the front suspension there are also high vertical vanes very close to the chassis (purple), which may be of this height due to the creative use of the rules – if the chassis is designed to be a little narrower than the maximum width, then tall vanes may be placed there that don’t have to be as low as the ones behind them.

There are also two horizontal curved boomerang wings (green) that Ferrari used from the Hungarian GP last year, which have become a common trend in this area of ​​the F1 car (not used by only Renault last year), helping to shape turbulent air flow from rotating front wheels and send it towards the radiator openings and around the sidepods.

The sidepod concept was first seen on the 2017 SF70H, which uses very high side openings for coolers and high-mounted lateral safety structures moved as far back as possible to clear the path to the air flow in the lower side of the sidepods.

The sidepod intakes (turquoise) are very small and contain a pair of carefuly shaped vertical vanes (blue) attached to the side safety structures (pink), and the lower structure is connected to a vertical element in this area as the upper one curves upwards.

Unlike the SF70H (2017), SF71H (2018) and SF90 (2019), the new SF1000 does not have an air intake on the upper side of the sidepods, which will further reduce air resistance and increase aerodynamic efficiency, which highlights how much Ferrari has progressed with cooling on their new car.

In the photo above, two boomerang wings (green) are also visible and the mirrors have open housing and are integrated into a complex aerodynamic structure that includes long horizontal carriers supported by shorter vertical ones.

The car has a noticeably smaller engine cover that wraps the components of the power unit more closely, which is one of the key elements of modern F1 cars due to the great impact it has on aerodynamics.

It can be seen that the sidepods fold downwards already on the ‘Shell’ logo, which was not the case on last year’s SF90, and the fin that vertically divides the engine cover starts around 30 centimeters behind the airbox above the driver’s head, a trend that Ferrari started on last year’s Spanish GP.

The airbox above the driver’s head is similar in its triangular shape to last year’s and noticeably smaller than on all other cars last season, with “horns” similar to those on the 2005 McLaren MP4-20, albeit much smaller, that are integrated with the TV camera housings.

It will be interesting to see if any other team chooses to use this interesting solution that helps direct and shape the air traveling towards the rear wing. 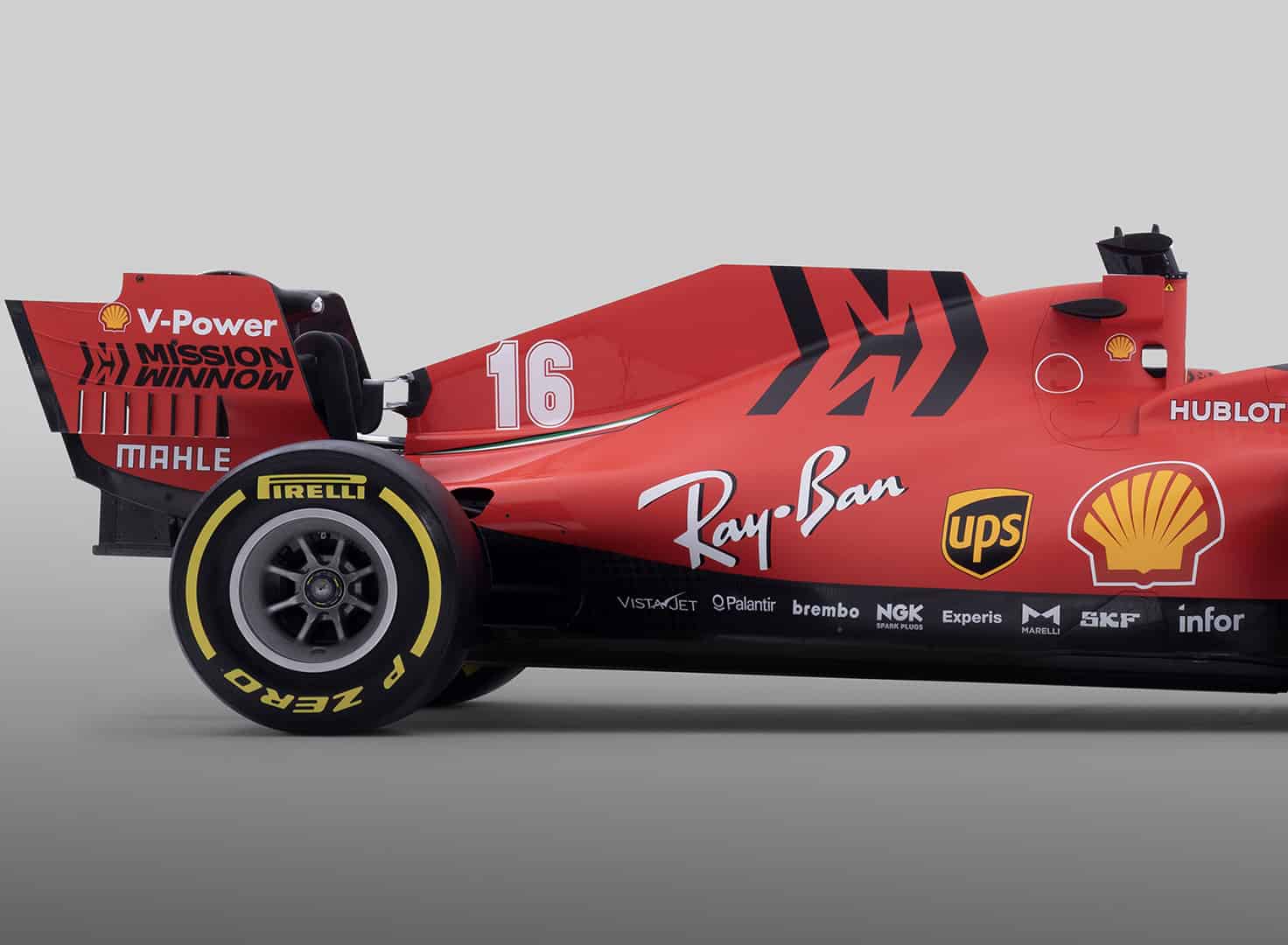 The rear suspension remains a pull rod configuration that Adrian Newey and Red Bull returned to Formula 1 in 2009, which allows for more aerodynamically favorable setup in this sensitive area while the rear end of SF1000 is narrower thanks to a more compact integration of power unit elements and new cooling system.

There is also a double T-wing on the SF1000, behind the shark fin, which creates some small amount of downforce and shapes the air traveling under the rear wing, increasing its efficiency.

The rear wing carriers remain double, which Ferrari has been using for several years, and the carriers are attached to the upper side of the lower rear wing element to reduce aerodynamic losses.

Although this is the basic specification of the new Ferrari SF1000, the car looks very promising so far, especially around the sidepods that are very compact and have very small air intakes, but still the car kept a very small intake above the driver’s head that was specific for SF90.

This shows how hard Ferrari worked on the new cooling system, which allowed them smaller intakes and a narrower engine cover, all to allow as much air as possible to pass over the floor and towards the rear wing.

Binotto admitted last year that the SF90 was designed to be a champion in aerodynamic efficiency rather than the biggest downforce, which is why Mercedes destroyed them in the first part of the season, and only a series of upgrades aimed at boosting downforce ignited its locked potential and better performance.

Whether with the new SF1000, which was initially designed to produce more downforce and make better use of Pirelli tires, Ferrari will be able to threaten Mercedes from its first race of the championship we will only see, but it seems they have learned important lessons from last season. Whether that will be enough time will tell, but we may get the first part of the answer in the pre-season testing, which start on February 19, but which were very misleading for Ferrari last year.